Up to the 9th October.

So it has been a bit of time since the last update but we have been working away quietly. There has been lots of small jobs done plus a large one as well. As normal all the work has been done following the government guidelines for social distancing. With the necessary line blockages to insure that all work is done safely. Looking after ourselves as well as passenger trains that were running.

To start with thanks needs to be given to a long standing member from Suffolk and occasional volunteer, Mike Poynton. Mike advised he was spending a weekend at Boat of Garten and wanted a task for his visit. With the weather been poor, Robert Walters our Station Manager, had identified that the South signal box had become quite grubby with the lack of use this year. Mike was provided with the necessary tools, cleaning materials and safety equipment to give the inside of the signal box a really good clean. Then, with the moving of the furniture etc, Mike applied two coats of red floor paint to the main part of the floor before he had to return South. Robert Walters then continued to complete the painting over the next two day, just in time before the engineering department turned up to do some shunting and take the crane to Aviemore for the delivery of  46464’s wheel sets.

In the North box we have been starting to look at the furniture in the signal box. Not a three piece sweat, but relay cabinet and writing desk. The relay cabinet, is from the former Holden signal box in East Yorkshire. It is requiring a bit of work, but fits in nicely on the floor. Now that the floor has been painted you can see the indentations on the floor of the old relay cabinet,  as well as the former block instrument in the corner. The writing desk is yet to be changed with one that will sit on top of the relay cabinet as can be seen in the old photographs. 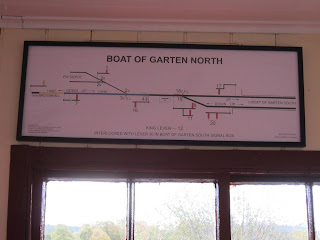 Sue Davies has been Very busy, trying to make sense of of what is going on and insuring that the new track diagram is completely correct and conveys all the information that the signallers requires. It is currently covered over with the current diagram but is ready for commissioning.

Hear is a closer look at the relay cabinet before it came out of storage. The part on the right of the cabinet is the cable termination area this is were the line side multi core cables from the line side locations will arrive and will then be wired up to the appropriate relays in the left hand side of the cabinet. The doors and door runners are requiring a bit of work. One door is missing it’s glass but we will get a replacement piece. Overall it is in very good condition and will serve the railway very well.

With the age of the signal box there is a few repairs required. Before carrying the relay cabinet up the stairs, each of the steps were made subject to the big hammer test. Quite simple really, hit the step hard with a p-way hammer if it gives in then it needs changed! One step was in very poor condition and failed the test. Some wood of the correct size was found and the tread replaced, before we took the heavy load of the relay cabinet up the stairs.

Under the signal box a lot of work has been done, “the big job”. The lever lock rack has been made bigger to cover all 20 leaver tails. Before this work started the lever rack was only built to cover levers tails 10 to 20. As back in the day I don’t think anyone envisioned the railway putting sidings into the old Engine shed site, let a lone a shed as well. The reason why this work has been done is that we require lever locks on lever 3 the FPL. (If the train is sitting on track circuit 6486, then the points lock can not be removed until the track is clear). The signals 4, 7 and 16 all require to be fitted with a lever lock too. With the points being electrically detected, this is the only way of making sure the correct route is set for the movement of the train. (The points are set and locked before the signal can be pulled off).

On the ground at the remote end of the diode track circuit, the disconnection box with the diode in it has been put in, the tail cables connected and clipped onto the sleeper ends. Both IRJ’s (insulated rail joint) are still waiting to go on when the p-way have the time. 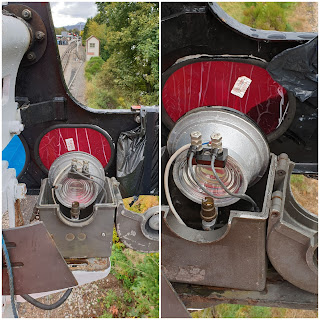 In this picture we are looking at number 16 signal to the left and then 7 to the right. Both now have there lamp units mounted on the brackets, cables have been run up the signal posts and terminated. Just need the location cases to terminate the other ends.

Number one signal now has it’s Balance weight attached. The cable has been run up the signal post, but still requires a lamp unit yet. Have got one, just not had the time to fit it. 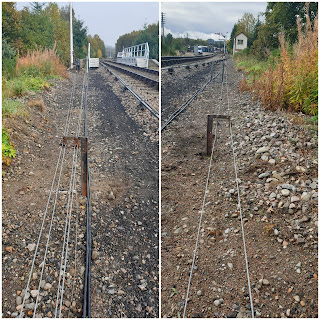 The wire runs out to the new signals. Although it is working very well there was still a couple of miner changes required, were the wire was rubbing on the pullie casting. Resulting in making the lever heavier to pull. With these pullie being changed it has definitely made it even lighter when pulling the signal lever to the off position. Small changes but will make for some very happy signaller’s.
Posted by S&T at 05:34 No comments: