Taking advantage of the sunny weather, Ray and Colin spent a further two days catching up on work that that had been postponed due to the previously inclement weather of a last couple of weeks ago. 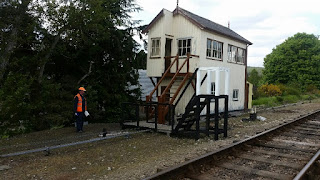 The final colours have been applied to staircase and work has progressed painting the token stand, which has been in bare wood since its construction probably over 5 years ago. 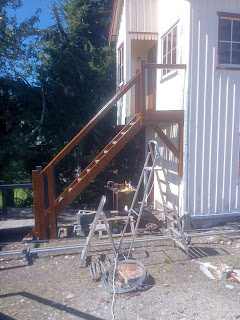 Further sections of the rotten moulding have also been cut out and replaced, but for the time being this is about all that can be done, until the scaffold has been erect, which is scheduled to be in place from 17June.

Progress! Progress! And a spanner in the works...

Progress! Progress! And a spanner in the works...

It has been a while since my last update but lots have been achieved. Lot of pictures for you to see! To start with credit needs to be given to the other departments that have been getting involved with what has tuned into a big project. Colin Frost and Co have been getting stuck into the much needed building maintenance and timber renewal of the North Signal cabin structure. Please have a read of the dedicated posts on this work. Then there is our E&P team lead by Nick Winter. Who I have to say, has done a brilliant job of bringing the power and distribution of the signal box right up to current standard. Unfortunately there has been a operations mishap by our locomotive department but this have been dealt with very quickly and efficiently by both P-way and S&T teams with normal working resumed by the next day. 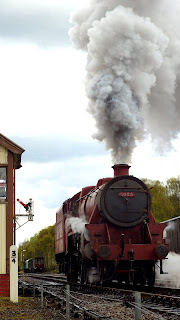 The picture dose have a signal in it! Number 19B of Speyside cabin, with our black 5, 5025 shown here doing test runs within the station area of Aviemore. The annual Maintenance and FPL testing has been completed at Aviemore Speyside and both Station ground frames, with the shed staff “playing trains” around us. 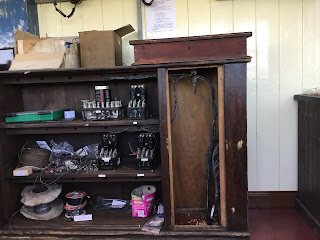 Back to Boat of Garten North Cabin. Work has progressed on connecting up the points indication circuit. Which has now been connected up, with the addition of electrical locks now working on 4, 7 and 16 signals. This is the three signals that protect the points. Now the mechanical interlocking checks that all the levers in the lever frame are in the correct position. With the electrical detection at the points proving that the points lever has put the points over and that the points lock lever has in-gauged the lock. Thus making sure that it is safe for trains to travel and stops signaller’s from doing anything that they should not.

The track circuits that are required to prove that no train is present over the points, will be installed in the near future. This has been delayed by the weather and S&T HQ not been able to work outside in the rain. But now that the points detection is installed there is no need for the use of the clamp and scotch making our P-way department much happier when taking their trains in and out of their site. 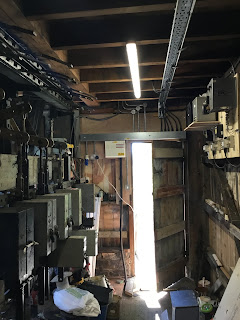 Underneath the cabin, lot’s has been going on Nick Winter’s new power distribution clear to see by the front door, new LED strip light meaning that we can now see! What a difference in light output compared to the old lights! The New S&T power distribution board is now live and work can now commence on moving the current signal lighting circuits over to the new board. Plus the B12 supply for the electrical locks and relays is now feed from the new supply. 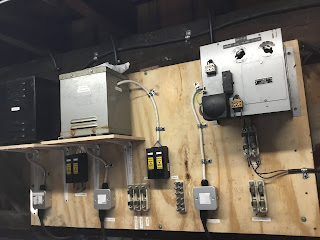 S&T power distribution board. 110v external, supply to the signal location cases when they arrive, to the left. 24v signal lighting in the middle still to be completed. On the right B12 supply for the internal lever locks and relays.

A look upstairs showing the new 1950’s style signal cabin lighting. This is a vast improvement compared to the original strip lights that was in the cabin. There are still period type lamp shades to go on and the  “old” current signal lighting switch still in place which will be removed once the control circuits have been moved onto the new power distribution board.

Looking to the north of the box you can see the signaller do get a light for the writing desk, for filling in there paperwork. The old Tilley lamp is still sitting on the original hook just to remind people of what the cabin originally had for lighting before the Strathspey Railway put electricity into the box. That’s right under BR this signal cabin never had a 240v mains supply. The other question some of you may ask, “why only two small lamps”. Simple, to reduce the light pollution. So the signaller can see out his windows at night. To see what train is there if it is clear of the signal and if it’s train is complete, and the tail light is showing. Note to signaller’s you now have a plug, table and seat to sit in for your cup of tea! No need to deserted your post now!

Unfortunately, in the first week of service there was a operational mishap. Probably not the best thing to be showing! But it shows how the railway pulls together to get things fixed and safe for the public in the most efficient way. When the train was making it’s run round movement at Aviemore. A bit of memory fog came over a member of staff which lead to the damage of the points at the North end of Aviemore station. Unfortunately damaging the stretcher bars, lock bar and right hand switch blade. In this picture the p-way have already removed some of the S&T equipment. Clamping the points making it safe for the train to depart in a trailing movement. (From the back of the picture, to the front). Once the train was out the way both S&T and p-way got to work to get things fixed before the train was to return. 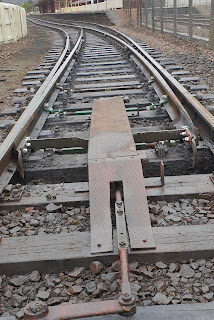 By the time the train was to return, replacement stretcher bars were on. Heat treatment had been applied to the bent switch with the correct pressure applied to bring it back to its correct shape. With this been achieved a clamp and scotch was fitted making it safe for the service train to pass over in a facing movement. With the happy passengers now back in Aviemore, the train that had now finished for the day was shunted away for the day allowing us to continue with the repairs. By 19.30 the points were back into original condition apart from a bit of welding that was required to build up the damaged right hand switch blade. The local blacksmith came out at 08.00 the next morning to successfully make this repair. The FPL was setup and tested. Once this work was completed and trains were running the next day from 10.00 with no one knowing any different. This was a bad situation, but it is a good example of how team Strathspey can come together to keep trains running. 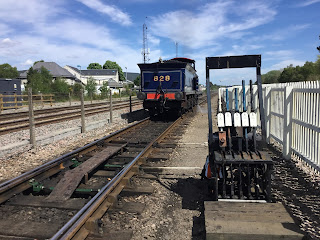 CR828 passing over the repaired points after a 7 day exam had been made on the North Station GF after the event. All nuts checked for tightness and a second FPL test carried out, to insure everything was ok. Which it was!