We made the most of the glorious weather over these three days, and managed to apply the final top coat to the east, west and north walls at first floor level.  This was followed by touching up the brown where it meets the cream, and we made a start on the final coat on the east side window frames.

However by the Wednesday afternoon it was too hot up on the scaffold in the sun where it was recorded at +35C phew.

At ground level more rotten timber was identified, which included a large piece replaced on the main beam at the northeast corner. 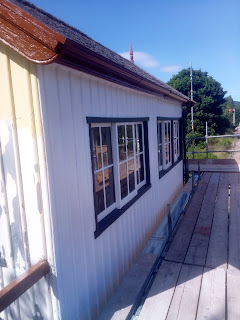 With the top level of scaffold now dismantled the gutters were accessible, a few small leaks were sealed and they were rubbed down, undercoat and the final top coat was applied. Undercoat was also applied to both the north and south walls and also the frames of all 36 windows were painted - a great job NOT. 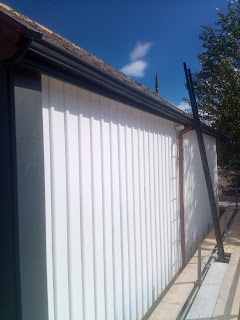 Ray and I had great help on the Wednesday when three members of the p-way team pitched up,

Jim Clarke, Neil McQueen and Mike Tough.  They did sterling work scrapping, rubbing down and applying undercoat to the back wall.

The ladder to ‘noware’ also received a rub down and a coat of black Hamerite, well it seemed churlish not to give it a coat of paint seeing as we had access up there!

Work on the roof area was completed with flashband applied to bond the slates with the timber facing on the roof edges.

Both apex ends of the box were painted with the finished top coats, and this completed the work on the top scaffold level. 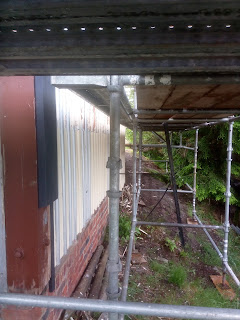 Meanwhile at first floor level, the north and south walls and windows were scrapped and rubbed down and primer applied to any bare wood and with all the loose putty removed from the window frames, fresh putty was applied. 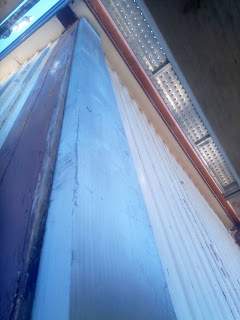 With another delivery of new mouldings, more defects were replaced, and a suitable 15ft long plank of timber was purchased from the Spey timber yard and this was fixed over the rotten area on the main support pillar on the rear North corner.

We now await the removal of the top level of scaffold so that the areas from the gutters can be accessed.

Since the last update lot’s of little jobs have been completed! Somethings still being difficult with Covid-19 regulations, others been difficult because of scaffolding around the Boat of Garten North signal box. The electrical wiring works within the North Signal box has been left for now until the painting gang completed there work to keep numbers within and around the structure at a Covid safe level. They are a very dedicated team and always seen to be there when we turn up.

Improvements have been made to the Aviemore Station north Ground Frame, new operator instructions have been mounted on to the back board, for operators to follow. Hopefully this will help, when the operator forgets what they are doing with the GF...

It was also identified that the loop stop board was of poor condition and required replacement. Yes it has been modified from it’s original wording but is quite clear on what needs to be done.

Moving to the other end of the line and the stop board has finally been installed in the loop. Giving the drivers a very clear point to stop before. This stop board was the one beside the water tower at Boat of Garten. Nothing goes to waste on this railway!

Back to Boat of Garten with the painters working on the North Box and COVID regulations regarding how many people are working in one area. It was time to get on with some outdoor work and do some painting of our own. Top coat of black paint has been applied to number one signal.

The outer home has received a coat of black paint at the bottom of the post as well. 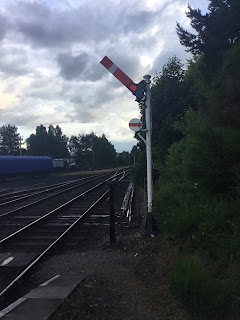 Improvement works has been made to 15 and 28 signal at Boat of Garten South box. A new arm and lenses has been applied to 28 signal. Plus 15 has received a new disc. This was not a big job but it improves the look of the signal and gives the drivers less excuses for not seeing them. 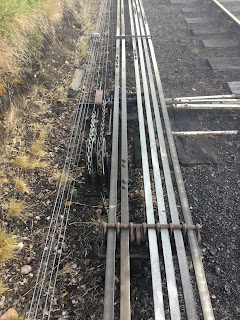 Problems were starting to develop with the detector for 15 and 28, in the form of the chains on the vertical wheels becoming badly worn. Preventing the points lock from being removed. New chains have been fitted and the problem removed.

One job has been completed within the North Box. This was done on a very late shift to avoid the painters. The existing signal lighting circuits have been transferred from the old temporary arrangement, onto the new signalling distribution board. The old system has been removed. Now just waiting for the location cases to connect up the supply to the signals to the north of the box. 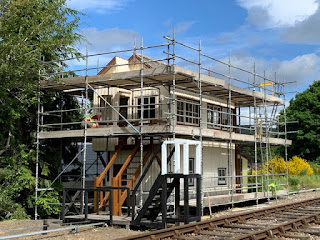 With the scaffold erected we were now able to inspect the intermediate levels and the roof. 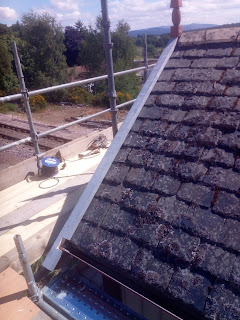 Firstly the edging timbers on each of the four roof edges were found to be beyond repair so suitable timber was sourced and these were replaced, meanwhile slipped and missing slates were dealt with and we were ready to start rubbing down the paintwork on the eaves.  Most of this was was just flaking off. 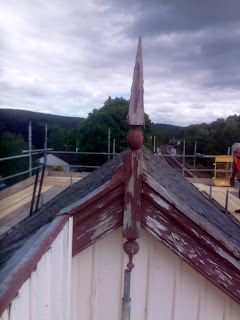 More rotten mouldings were also identified and replaced where we could, but we are now awaiting a further supply of new mouldings to complete this job. 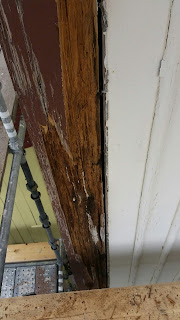 A large section of the main support pillar on the rear North corner was also rotten, so the rot was removed and treated with preserver, now awaiting the supply of more new timber.