Good Friday was a good day for Scottish signaling heritage. As there is now three operational Tyers key token sections in Scotland. Two belonging to Network rail, Dunraagit to Stranraer and Mauchline to Ayr, interestingly with an intermediate instrument at Annbank GF. Now you have a third on the Strathspey Railway. Preserving the traditional signaling method of Scotland for all to see, (When tours are available). Between Aviemore and Boat of Garten. But! There is more. The Strathspey Railway is the only one that works over 5 miles of traditional pole route! There is no multicore cables been used within the system, other than the tail cables from the end of the pole route to the signal cabins.

It has been a long time coming with various challenges on the way. The tail cable from Aviemore Speyside cabin to the pole route was found to have poor insulation and cores were leaking to earth. Which first needed to be replaced. A new cable conduit had to be run down the length of the carriage storage shed. Then there was finding a source of tokens. We, as in the railway do have some historic tokens that could have been recycled. But it was agreed it would be an act of vandalism to deface them. So we continued to look for a source of new ones which did take up a lot of time and networking. Kind donations were added to this project in the form of new token pouch’s too. Thankfully they did turn out to be the right size for the new tokens.

This is a big step forwards for the railway and it’s aims to recreate how the original Highland Mainline looked, felt and sounded in the late 1950s early 1960s. With it’s traditional semaphore signaling, Omnibus phone systems between each signal cabin. All of which is fitting for our heritage railway. 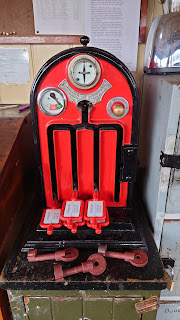 The withdrawal of the old “test” tokens and the new WR keys installed. Note, that one token has been withdrawn from the instrument, ready for the first train of the day to Boat of Garten. Which is why the indicator is showing train going to. The system has increased from 8 test tokens to 12 WR keys.

Again, but this time at Boat of Garten. Showing the withdrawal of the old “test” tokens and the new WR keys installed. Note this picture was taken after the token had been withdrawn from the Aviemore instrument, ready for the first train of the day. Which is why the indicator is showing train coming from. The system has increased from 8 test tokens to 12 WR keys.

This was the last part of the puzzle withdrawing the old temporary “test” token from the train crew. Briefing them on what is happening, informing them of the new operation notice that has just been released and handing them the new WR key. Almost job done!