Our aim on this visit was to finish all areas that required scaffold access, and to this end the final top coat of ‘Pollen’ was applied to the walls in all the remaining areas just above ground level. 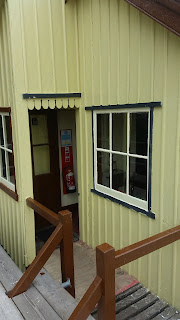 This achieved we moved on to paint the three windows in the porch area with undercoat and the finished top coat of “Banana dream 6” applied.  The porch was also completed, with the ceiling now in white and the window in light cream, which now gives a much lighter effect, as it had previously been painted brown. 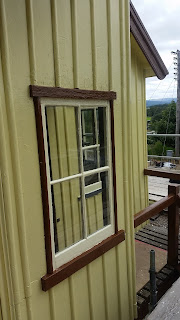 At ground level on the east side of the under-croft there were two panes of wired glass that had been damaged many years ago, so these were removed and replaced with similar glass, and finally working at ground level around the back of the box, under the maze of supporting scaffold poles the undercoat was commenced on the north and west walls. 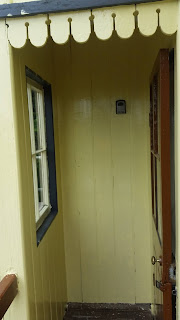 As a final touch the windows on the east and north sides were paint scraped and given a clean.

The good news is that the scaffold is being removed on Tuesday 24th after being in place for just about two months.