Detection of A end of points.

To say this has been simple. Straight forwards! Was not a problem at all! Well not quite. This has been challenging to the last nut and bolt. With several rethinks and a lot of tea drinking. Still it’s in and meets with the specifications that must be achieved. It requires to be Electrically wired up yet, as well as the electrical interlocking within the signal box still to do. 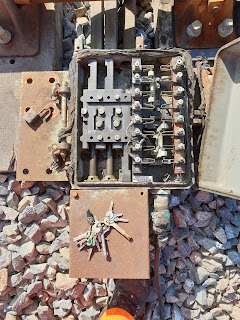 This is the HJ Detector, I would have liked to have installed. It came over the fence from the Networkrail Aviemore project. It was part of the redundant materials that the Strathspey was given. Unfortunately it is set up to be on the left hand side of the points as you look at them. It can not be changed to a right hand mount without the locking bars been swapped out. The reason it can not be fitted on the lefthand side is simply, the points rodding is in the way. 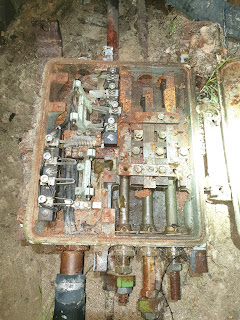 This HJ detector was looked out from our store, was not in the best of condition. Although it is set up correctly to be on the right hand side of the points and contains the correct locking bars that can be swap out. But first will clean it up and see if this on can be fitted. 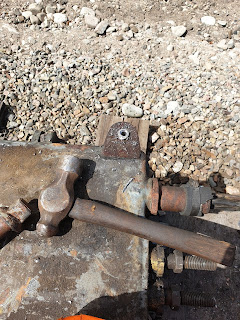 Before having a good looking at the insides of the HJ detector. The mounting brackets of this detector required to be removed. Unfortunately the mounting brackets are of the wrong type for the type of rail and buckled beyond repair. Managed to get three of the nuts off, there are four in total. One in each corner. The bolts, where stuck fast and an angle grinder needed to be applied to cut them all off. Unfortunately they would not knock out with out a lot of pressure being applied. The problem being that the body of the detector is cast and is likely to fracture if to much force is applied. A much kinder approach was required. Drilling a hole through the old bolt to weaken it, allowing it to collapse in on it self. Reducing its hold and allowing it to be knocked out with out damaging the casting. 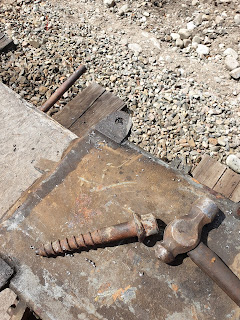 Making progress! All four bolts out, now to have a good look at the insides. 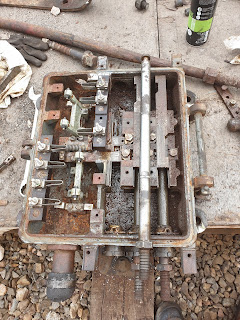 Stripping it down reviled a few problems with corrosion on key parts.  ThIs is the unfortunate part of it being in storage for a long time out in the open. Some parts Where heavily pitted and some of the “fingers” the electrical contacts broken. 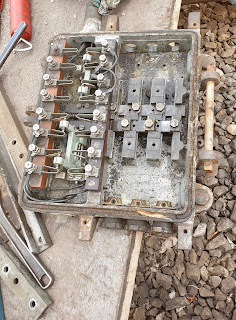 Corroded parts that needed to be swapped were swapped. The fingers changed over to the other body and a good clean. This is how it was looking before putting the mechanical Locking parts back in. Has very much been stripped right down and built back up. A workshop would have been better for this job, but a p-way trolley as a workbench is just as good. 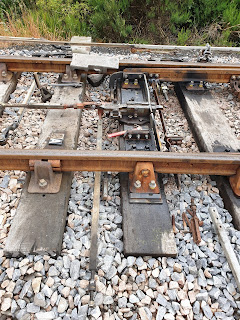 Before mounting the detector, the drop lugs on the switches had to be turned and a good alignment achieved. This is to know were the detector is to be placed. Yes it goes between the sleepers! but it all needs to line up. If there is any rubbing or it is not square it will make the points harder for the signaller to pull.

Then the more challenging part, Getting everything to line up and then screwed down. First the rods are placed in, detector placed on top and all cheeked. Before being screwed down, You can see the BR standard mounting plates used to secure the detector to the timbers in this picture. Once this was done, then needed to measure how long each rod needed to be to go between the drop lugs and the detector lugs. These where removed, cut, drilled and offered up. Fitting nicely just a little adjustment was required but worked really well. So now it is ready to be Electrically wired up. 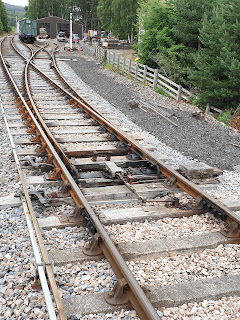 A Nice clean and tidy site. For those who are not sure why this is being done. It is for the locking controls of the signalling. Before the signal can be “pulled off” allowing the train to pass over the points, in a facing move. We need to prove that the points are in fact, closed and locked. If the system dose not see that the points are closed and locked,  then the signaller will not be able to pull any signal in a facing move over the points.
Posted by S&T at 22:20