The work done at present is a bit like a wind up clock , each part needs to be working in unison to create functionality and so little tedious jobs that are time consuming have as much benefit to the project albeit unseen.

The first of the unseen Jobs was to get the pedestal wheels in under the box. Not the simplest of jobs to do! With the aid of string lines, rulers and power tools. Each wheel has been placed into it’s correct position, for receiving the wire from the lever tail and passing it out to the flat wheel outside. Which then sends the wire on it’s way to the signal. If anyone of these parts is out of alinement, then the harder the pull on the lever will be. As well as more likely to have faults in the future. Within this picture you can see that all the pedestal wheels have been placed and screwed down.

The way that the existing signals have been attached to the lever tail is with chain and S clips. To maintain the look and to keep everything uniformed. The same Practice has been applied with the new signals that we are putting in. This is a picture of the first trial fitting. It took lots of attempts to get the correct length of chain for each lever but with a bit of perseverance it all came right.

On the outside of the box it was found that the front table needed to be extended to get the flat wheel on for number one signal. So more digging, drilling and power tools. Two new timbers Where added, all just for one wheel. Although now looking at it. It dose tidy up the front of the box and makes it look like it has a much bigger frame within the signal box. As it did back in the day. Also in this picture you can see how the flat wheels have all been placed out first, with the aid of string lines to get the correct position. The other problem that complicates things is the need to get the wires in the correct order. Signal number 16 needs to be the wire nearest the signal box as it is the signal closest. As well as the signal being on the left hand side of the wire run. Then signal number 4’s wire needs to be the second wire from the signal box side. It is the second closest signal and is on the left hand side of the wire run. Both signal wires for 1 and 7 signals both go over the bridge. 1 drops away with a flatwheel on its left to go under the track to the signal. This is the third wire from the signal box side. While 7, the closest to the track, runs on it’s own all the way to the outer home. It’s been a lot of tea drinking and drawing sketches on the back of envelopes but I hope it all works out well.

Hear you can see the completed job from the outside. All the flat wheels are screwed down, chains or wire ropes coming out from the lever tails. For 17 all that is needing to be done is to run the wire run. Everything is now in place. All other pedestal wheels, flat wheels and wire pulleys are all in place. 16,7,4 and 1, there is still some work to do. The stakes need to be put in the ground every 9yrd to hold the wires( about 50 to put in). The wire pulleys to be fitted to the stakes, Two flat wheels to be positioned And screwed down, for number one signal. Plus a some other jobs! The list is getting smaller! 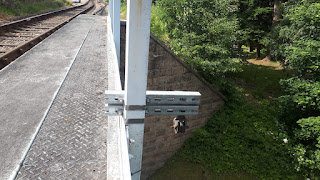 Davie Dow has helped out with creating and mounting of the pulley in the middle of the bridge to take the signal wires. For this I am most grateful.

A little bit more work has been done on the outer home. With the ladder now up, and signal arm put on. This in it’s self was no easy task as the signal is 28ft tall with a ladder of 29ft ish, at an incline of  1 in 12. This is the standard for this type of LMS post. The arm will be bagged up before any trains are running and will only be de-baged when coming into use. Once the project is completed. This is  hopefully at the start of next season.
Posted by S&T at 21:51