Yet again we have been hard at it! But now it is quite nice as everything is starting to come together and more jobs are being completed rather than started. 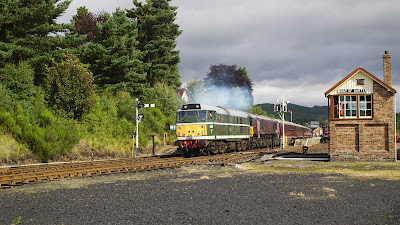 Not quite about the current project but still nice to see. 28, 15 and 26 signals, with 26 signal in the off position. Plus our resident class 31 leaving Boat of Garten from platform 2. With the Royal Scotsman tour train plus a dead class 66 on tow. The class 66 is acting as a brake van as the second MK3 with the brake in it, is not on the train.

Well I will start with an apology to the P-way! Yes that is your mileage post sitting to one side! It was in the way of the wire run. The wire run stakes are now all in the ground, apart for the last 4 still to go in. We stopped at this point as the two loc’s still need to be taken out again. Plus the embankment needs a wee trim back as well. This is to get a good line to the base of the signal. The wire run is set back by 7ft from the running line, ensuring that a good and safe walkway is maintained.

Number 7 signal wire (the outer home) has been run from the signal box to this point. The coils of new wire that we have in stock are about 70yd short on there own. So a part coil of new signal wire left over from running 17 signal wire run has been used up on 7 signal run. As it will require a joint in it to complete the run.  The joint and the the rest of the wire run will be run once the loc’s have been removed at the outer home and stakes have been completed.

This is Ben our newest volunteer to the railway who is helping me out with the S&T work. Seen hear making off the wire for 17 signal.

This is 17 signal completed, on the ground. It will remain out of use until the mechanical interlocking is done. So it can only been pulled when points are set and the line is safe for the train movement.

This is the shunt signal for going into the engineering sidings. The round disc covered by the black bag! Well you can’t see it in this picture but it is connected up and is in the off position. Again this signal will remain out of use until the interlocking, points detection and track circuits are completed.

This one is a bit easier to see. This is 16 signal all connected up and displaying a hidden off! Again with both of these signals, they will remain out of use until the mechanical interlocking, the track circuits and points detection are completed.

The next one to be completed was number one signal. Coming out of the engineering sidings. With the wire run connected up, the mechanical detection of the B end of the points was adjusted, set up and tested. As the mechanical interlocking is in place between leavers one and two, detection of the facing point has been achieved. Number one signal can be brought into use.

With things progressing well, it was decided that it was time to cut the FPL in the reverse direction of the A end of the points. Set up and tested with the 3.5mm gauge and 1.5mm gauge. With the 1.5mm gauge placed between the switch and stock rail, the point can be locked. Although with the 3.5mm gauge in, the points can not be locked. Protecting agents unsafe train movements and will not allow signal 4 for the sidings or 16 for the main line to be pulled off. This is an ORR required test that on our railway is carried out once a year.

A bit of work has been done in the signal box, the new block shelf brackets have been mounted and block shelf placed on top for now. Please note the type of shelf we have put in. It looks the same as the old photographs of Boat of Garten North Box. Not your standard type block shelf that you see in most other signal boxes. It still requires a bit of work before being mounted properly. Between myself and Ben, we have all so been doing a bit of painting and I must say the frame is looking quite smart now. Just the rest of the signal box to be painted.. Help please! 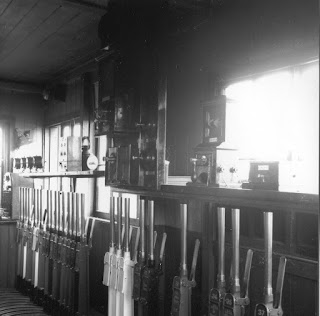 Just a small reminder of how the signal box use to look at around 1957, and what we would like to recreate, in a way that works for “our” railway operators.
Posted by S&T at 06:58